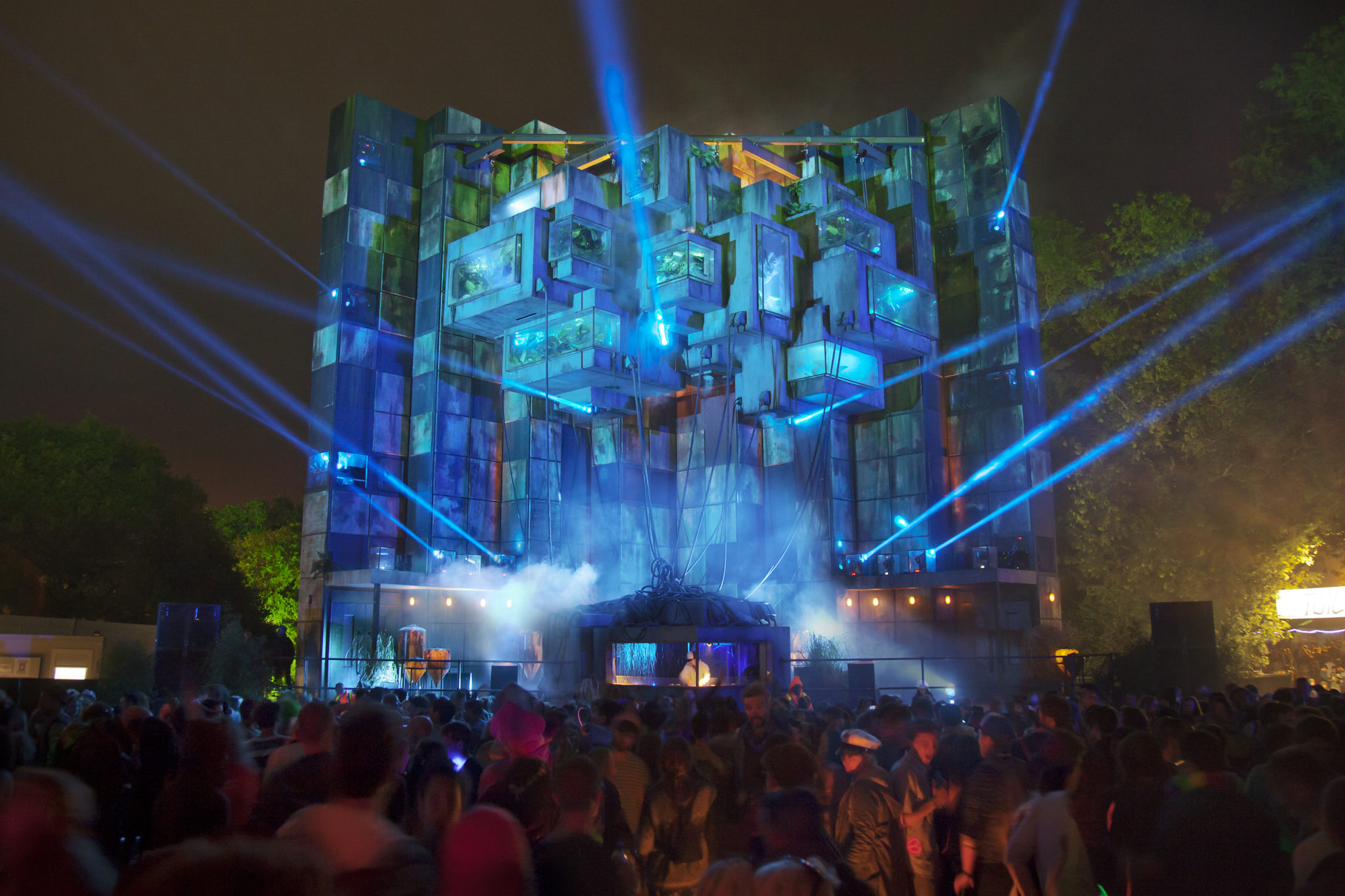 “We thought about life by analogy – as a journey or a pilgrimage – which had a serious purpose at the end. The thing was to get to that end […] But we missed the point along the whole way. It was a musical thing and you were supposed to sing or dance while the music was being played.”

Debonair English philosopher Alan Watts had a way with words, combining the demeanour of David Niven, the wise curiosity of the Dalai Lama, and the swinging mischief of Austin Powers. He understood the importance of play, of enjoying life’s path itself rather than stressing over an elusive destination.

His musical metaphor is one not lost on the teams who mix music, art and technology to create epic shared experiences. I spoke to some of the pioneers and leading lights of festival installations to get the lowdown on this modern-day magic.

Coachella’s art curator Philip Blaine has been putting together parties since the raves of the 90s and has produced live events for the likes of Depeche Mode, Massive Attack, the Cure and Björk. “It took off when Coachella gave me a budget in 2002. It was small, but we made the most of it. As the Coachella art budget increased we could build custom pieces, and that’s when architecture, engineering and safety really came into play,” he says.

Block9’s first ‘NYC Downlow’ installation at Glastonbury in 2007 is now the stuff of legend, a faithful replica of a crumbling tenement block in Manhattan’s Lower East Side, set in the late 70s. Founders Stephen Gallagher and Gideon Berger were working on a shoestring budget, as Stephen recalls: “Everyone pitched in to make it happen, it really was a labour of love. When I look back at the old photos and plans it’s kind of amazing that we pulled it together!”

Block9’s creations range from The Castle at Banksy’s ‘Dismaland’ to their epic ‘London Underground’ for Glastonbury 2011, where six stories of a London tower block were recreated with a derailed Northern Line tube train smashed through it. Last year they went one step further, reconstructing a seedy New York meatpacking warehouse in the 80s, complete with go-go butcher boys, meat carcasses and a semi-destroyed cigarette billboard that invites you to “Try it, you might like it”. Stephen explains the process: “Projects of this kind are only possible through combining deep research with engineering and technical knowledge gained over the years. The research involved trawling archive photos and film footage and studying historical accounts of the socio-economic and political climate of early 80s New York. At the same time we developed a new system for waterproofing the scaffolding structure that supports the set – including the replica bathhouse reception you have to pass through on your way into the club – and overcame the challenge of safely supporting a precarious-looking half a tonne billboard eight meters above people’s heads, by using 23 tonnes of concrete ballast and two cranes!”

Philip Blaine predicts that festival installations will continue to use more technology, and that art pieces will be “more incorporated with the rest of the festival elements like stages”. He firmly believes that cities, too, should learn from these playful spaces. “Urban planning really should require more large-scale installation art. Cities that are aggressive in the arts create more tourism, more creative thought and greater cultural appreciation!”

Victor De La Serna, bookings director at Spanish event producers Elrow, explains that the audience experience is their top priority, regardless of context: “For us, it is simple, it needs to be a sensory explosion all around you from the moment you cross the front door. It doesn’t matter if it’s 500, 5,000 or 25,000 people, you need to make it work.”

And Elrow is famous for making it work. Their immersive parties include elaborate themed set designs, performers, props, and plenty of surprises. The ‘confetti kings’ recently took over the Albert Hall in Manchester for a Bollywood-themed party, (though their depiction of Hindu deity Shiva enjoying a smoke and a drink caused some controversy), while their closing party at Space Ibiza is famous for its ‘inflatable madness’, hyper-euphoria and, of course, confetti.

“All of the pieces we produce seek an emotional response – laughter and fun! When people go out to party, one of the main things they need is to escape,” Victor explains. “You escape from work, from real life, from troubles, from being tired, to feel like someone different, to feel free and uninhibited, to lose yourself in the music, with the performers, with random people you just met. That’s the magic of it; for x amount of hours, you can be whoever you want to be, and it’s our responsibility to bring you that experience the best way possible.”

Veronique Cecchini is driven by a desire to co-create exquisite spaces for shared experiences in harmony with nature. A veteran of Glastonbury, The Secret Garden Party, and Shambala, Veronique is now director for the fiercely eco-friendly Meadows in The Mountains festival. Those who complete the journey to the Rhodope mountains in Bulgaria are rewarded with three days of conscious hedonism in stunning surroundings. Hidden in the forest are a treehouse nightclub, giant wooden pods for chilling out, and a wooden Viking ship festooned with fairy lights. The timber shacks, art installations, and staging are all sustainably sourced from the surrounding forests. Revelers are encouraged to bring their own drinking containers, smokers their own portable ashtrays, and the tickets are limited to 2,000.

Veronique and team ensure that their installations are created with respect for the mountain and the villagers who live there: “Year on year, we maintain and develop our previous installations whilst creating new ones. One year we arrived on site to find that our Birds Nest Sunrise Stage had been overtaken with ivy and wild flowers – it was stunningly beautiful and we just left it like that.”

Although the Block9 projects have grown in scale, complexity and spectacle, their motivation remains the same. Stephen shares their philosophy with a shamanic zeal: “Our work is a celebration of being alive despite, or maybe because of, all the shit we have to deal with in our day-to-day routines. We’re all so tied up ‘surviving’. Birth, school, work, death – it’s good to have some fucking distractions! Even better if those distractions can be meaningful in some way. We’re trying to create spaces that bring music, art and people together to create magical temporary moments in their lives – moments where they get to experience something new, visceral and exciting. We like to put people near the edge of where they are comfortable and hope that they take something from that, and we hope that Block 9 might have a positive lasting impact on their lives. The idea of a powerful shared experience is at the centre of what we do.”

I feel that Alan Watts would approve of these sentiments. Maybe Alan’s spirit will visit the NYC Downlow at Glastonbury this summer, leading the dancefloor at 3 am on Saturday night, and helping the Block9 crew celebrate ten epic years – or maybe at Burning Man, Meadows in The Mountains, Coachella or Elrow. Maybe you too will be there, celebrating the joy of life itself, gloriously free to shine your light with like-minded souls, unconcerned with the problems and pressures of the world for a beautiful, transient moment.

Did you enjoy this piece about the tech and philosophy behind music festival installations? Click here for more articles.