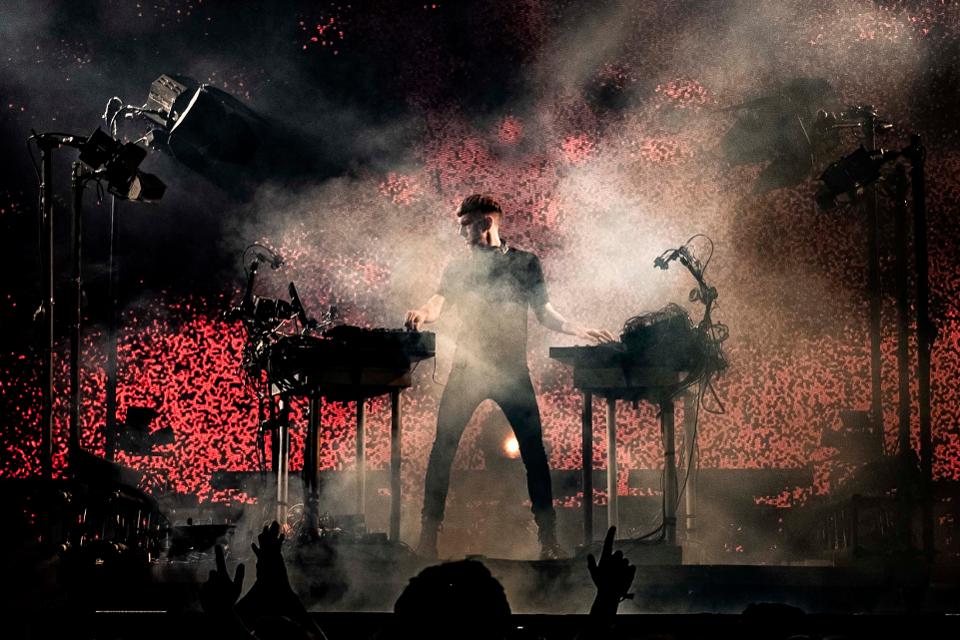 Richie Hawtin has always sounded like a visitor from the future, a man who fell to earth. His name is synonymous with music technology and with techno music. Speaking from Berlin, he recalls his good fortune in witnessing the birth of the genre. “I was in Detroit searching for electronic music, and what I found was an explosion of Detroit techno, music that was being created right at that moment. It was like a bubble of intensity and creativity. I was at the right place at the right time with the right intention. I wanted to get involved.”

Hawtin grew up in Windsor, a city in southwestern Ontario, Canada, directly across the river from Detroit. He had been switched on to the potential of electronic music by his father’s record collection, but quickly outgrew the local scene in his hometown, he reveals. “Being a kid who was looking for something a little bit different, or feeling a bit alternative, the amount of possibilities for record stores or clothing stores-or whatever I was looking for as a teenager-were quickly exhausted in Windsor.”

On crossing the border, the “motor city” sound that met the teenage Hawtin was a far cry from the hit factory of Motown in the ’60s. A much harder, darker electronic mood met his thirst for escape and electronic stimulation. “I was pulled to Detroit to find other possibilities, and I found incredible record shops. I also tuned into Detroit radio and started hearing early acid house and industrial and started going to all my concerts there. Detroit was a big part of my teenage years. Detroit was where I really fell in love with clubbing and then got introduced and fell in love with techno and the deeper side of electronic music.”

Hawtin recalls the groundbreaking work of Derrick May, Jeff Mills and The Electrifying Mojo. “It was a crazy time, especially for American radio, because it was before hip hop took over the airwaves. In Detroit, five days a week at noon on everybody’s lunch break, there was something called the ‘Midday Cuisine Mix’, a 30-minute house and techno mix. At night you would have Mojo on, and five nights a week there was a 25-minute Jeff Mills mix where he smashed together early industrial with Chicago acid house and U.K. synth-pop. It was an incredible, vibrant time and I was lucky to be inspired by DJs and artists who were already pushing the craft of DJing out of the more traditional direction.”

His father, an engineer, also had a profound influence on Hawtin’s approach to the sonic possibilities that music could offer. “When I was growing up, either my dad was in front of his hi-fi listening to things like Tangerine Dream or Kraftwerk or Pink Floyd, or he was sitting at the kitchen room table taking pieces of kit apart and trying to modify them, or trying to build early computers. It definitely seeped into my psyche. As I got into music, my dad was there if I needed something modified at my studio. My friends in Detroit called him my ‘secret weapon’ and he definitely has been that many times during my career.”

“The sound of the future was created by discarded technology“

The early Detroit techno scene was resolutely DIY, he explains. “Back then, the scene was so small that the only people involved were those who wanted to roll up their sleeves and go down to pawn shops and find whatever instrument was there cheap enough that made some weird blips, plugging it in and trying to create something. The sound of the future was created by technology that had been discarded because it didn’t actually fit its original intention.” Hawtin mentions the now-iconic Roland TB-303 Bass Line in particular, “The 303 was made to practice, or get rid of, your bass player, and it sounded nothing like a real bassline. It was actually a horrible failure for its intentions, but inadvertently created the texture and the frequency that inspired a whole new generation of music-especially Detroit techno and Chicago acid house-which was a huge inspiration. There was a crossover of technology becoming available and early digital studios. Everything that you used to have to go to a multimillion-dollar recording studio for, you could now do at home.”

This DIY approach extended to every aspect of releasing music for Hawtin, often by necessity. “There were no manuals for any of the equipment because it was all secondhand. There was no manual of how to release a record or how to distribute it. So, we would call up friends or you’d call up a pressing plant and say, ‘How do I get a record pressed?’ ‘OK, well you need a master it first.’ ‘Well, what’s mastering?’ ‘You should talk to this guy.’ And then once you had it, you got it. It was an incredible time.”

Hawtin started the Plus 8 record label together with John Acquaviva because it was the only way to release their music, but they quickly realized it had a bigger purpose. “There were other people around the world who were making really cool music and had this shared ideology of techno and futuristic music but also needed help releasing. So we said ‘let’s help them.'”

The “cottage industry” of Plus 8 became a hugely influential global springboard for many electronic acts, and was the beginning of Hawtin and Acquaviva’s approach of backing their idealism with investment. “We always thought wouldn’t it be great if we could also invest or create technologies that help further stimulate creativity in our scene. We were the first investors in Beatport (the iTunes of electronic music), and there were some projects with Allen & Heath. In that same philosophy of bringing together like-minded people and helping, we became Plus 8 Equity along with our partner Rishi Patel. We invited people from our scene to put money into the pot and to allow us to invest back into our industry.” The companies helped by Plus 8 Equity Partners include the innovative cloud-based AI-mastering platform LANDR Audio, and social augmented reality company VNTANA.

Hawtin is the first to acknowledge the pervasive role of technology throughout his career. “I’m a product of technology becoming more available to the regular person on the street. If I hadn’t have found that 303, or that VIC 20 computer, I wouldn’t have been able to tap into this side of myself and become a DJ and become a musician. I always remember that, and I want to continue unlocking that opportunity for the next generation.” Hawtin’s continual motivation is not only to entertain but to demystify and democratize technology for a new generation of music lovers. With his latest release, he brings this philosophy to a new level.

His new audiovisual mix album CLOSE COMBINED will also be released as CLOSER, a free interactive mobile app, which he has been demonstrating at Today at Apple masterclasses in Paris, Milan and London. The app offers fans the opportunity to experience Hawtin’s live recordings from different camera angles, and also to interact with different audio elements, he explains. “On one level CLOSER is to show what I do, to be entertaining, but also especially with the app to give people further insight, playful insight, into how I play and why, and also to be able to listen in to some of the separate audio streams, to see the components.” Future app updates will include brand new performances, creating an ever-evolving audiovisual archive of material to interact with.

Some years ago, Hawtin decided to outsource the beat-matching of his DJ sets to his software, enabling him to concentrate on bigger creative performance opportunities. He believes that-in the future-the same kind of AI-augmented performance tools might extend to real-time song selection from a global pool of connected creatives. But regardless of any new technologies in play, his motivations come from the heart. “I want to explore how we can continue to live in this beautiful moment of frequencies which happens when you’re on the middle of a dance floor, and a really creative DJ or musician is performing, and just letting it happen at that moment.”

Based on his current trajectory, Hawtin will continue to bring us futuristic music powered by the cutting edge of technology, as only a visitor from the future can.

Richie Hawtin’s next CLOSE shows will happen in Amsterdam on October 16 and Los Angeles on November 23.

Did you enjoy this piece about Richie Hawtin? Click here for more articles.