Robert Fripp at the BPI

Last week I had the pleasure of hearing Robert Fripp speak, to a small invite-only audience at the BPI. My love of Fripp’s music goes back to 1980 and the release of Scary Monsters (my first Bowie album, bought from Golden Discs, Grafton Street, winters evening 1980). From there is was the superb League of Gentlemen LP (borrowed from Vinny Murphy, a Fripp evangelist) and the relevant Bowie back catalogues (picked up month by month at secondhand record shops). I even picked up a copy of King Crimson’s “Discipline” in a French supermarket in 1981, I think, but the music that really did it for me was Fripp’s solo album “Let The Power Fall“. 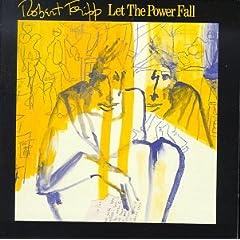 Let The Power Fall used the same “Frippertonics” technology used on “No Pussyfooting” with Brian Eno. Apparently Eno had tried the technology with other musicians, but only Fripp cut the mustard, and went on to make it his own. For this LP, Fripp improvised across two revox tape decks, a note at a time, which would loop and in turn provide the backdrop for more notes, slowly building a cathedral of sound. The pieces on Let The Power Fall are astonishing, singular, beautiful, devastating…. the soundtrack to my life for a significant time… What’s also remarkable is the method of their creation, Fripp recorded these, live, during his “anti-tour” in 1980, playing at restaurants, record shops, radio stations, small clubs, museums, and recording industry offices. The sleevenotes were a manifesto which Carl Hyde from Underworld referenced as a key influence on their post V2 philosophy:

“The future unit of organization is the small, mobile, and intelligent unit where intelligence is defined as the capacity to perceive rightness, mobile the capacity to act on that perception and small the necessary condition for that action in a contracting world.

Fripps own manifesto on live performance (see the sleevenotes for “Soundscapes Volume 1 — Live In Argentina“) was about creating a situation where each gig was unique, directly involving the audience. A performance of music always being 50% performer, 50% audience. Performance in a vacuum is always incomplete.

I had the rare chance to experience this in person when Fripp did a series of performances in the foyer of the Queen Elizabeth Hall in London, many years later in 1996. I did not expect to have the chance to see a Fripp solo live performance, so made sure I got to most of them. The longest gig was about 8 hours, it was transcendent, cathedrals of sound were built and deconstructed; the noise of interval crowds, behind you in the foyer, merged into a single moment between performer, audience/spectators, environment. I floated out of there…

So – forward to 2008 all too quickly, Fripp is telling the BPI audience about being f*cked over by the music industry, many times, in many ways. The worst culprits being the major record labels and indeed high street retailers, putting any fan-led downloading in perspective with wholesale copyright violation, unauthorised releases, commercial piracy… unremittingly grim, and still ongoing. Good to hear that none other then John Kennedy came to Fripps rescue at a crucial point, I was lucky enough to have John as my lawyer when starting out in music, a *complete* hero, now head of the BPI.

During the BPI talk Fripp outlined the components of ethical business, referencing “Just Business” by Elaine Sternberg, notably because the concepts of ethical business were and still are “completely absent” from the music industry at large. However, Fripp runs his own label these days, Discipline Global Mobile, which operates using ethical business practises. Their approach to copyright is not about securing it from the artist by hook or by crook, and sitting on it (an approach which led to vast overvaluation of some of the majors) but rather te approach that copyright is an obligation to manage on behalf of artists. If labels don’t manage it effectively, fans will do it illegally.

I met Fripp afterwards (thanks to an intro from Declan Coglan) which was a complete buzz…. I was of course lost for words.

Later on one of the guys from Discipline Global Mobile mentioned that one of the performances from the Queen Elizabeth Hall “Sometimes God Hides” was later released – I’ve already ordered it. I’m also looking forward to Fripp’s Orchestral Soundscape album, which will be released…. when its released. And the reason for Evening Star not being on sale in iTunes? Single track pricing for these 30 minute masterpieces…. doh! I’m ordering it on CD….

Depressingly, Fripp has been on a sabbatical from performing for over a year. The reason, apparently, to chase lost royalties, to rail against this mainstream piracy.

Well, I wish him luck.